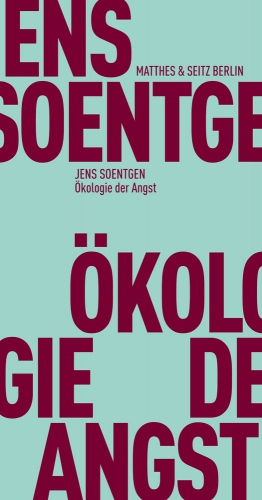 The Ecology of Fear

Genre: Nature, Philosophy, Essay, Nonfiction
On the meaning of fear at the age of the Anthropocene

Fear is an essential emotion for surviving. Animals experience fear – especially of human beings. From our own experiences we know how fear feels from the inside. Jens Soentgen brings a strong contribution to the ecology of Anthropocene: Predator and prey are related on a subjective, emotional and cognitive level. The predator role is mostly played by humans. The worldwide killing of animals by humans not only means a dramatic reduction of specific populations but also a widespread anxiety among survivors. This anxiety is changing habits, reproduction, ingestion and movement of species. This book can be read as an effort for reconciliation: reducing fear could be such a necessary ethical offer as reducing pain.

Jens Soentgen, born in Bensberg in 1967, is a chemist and philosopher. Since 2002, he has been scientific director of the Environmental Science Center at the University of Augsburg and also adjunct professor of philosophy at the Memorial University of Newfoundland in St. John's, Canada. His scientific and popular works are available in many languages and have received several awards.