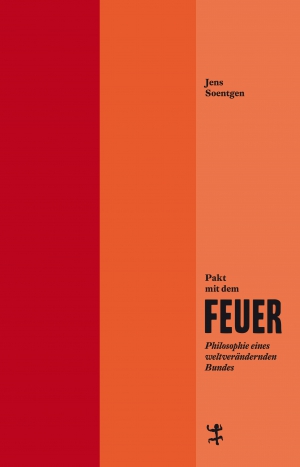 Pact with the Fire

Philosophy of a world-changing covenant

Genre: Nature, Philosophy, Essay, Nonfiction
The Promethean Pact, the power of negation, and man as an environment-changing being - and fire as the unifying prism through which the dangers of our present can be better illuminated.

The fires that have been ravaging entire regions in Australia, California or Brandenburg summer after summer for some years now are devastating. Even greater, however, are the everyday fires that burn in technical facilities on the outskirts or in the middle of modern metropolises, especially in Asia, America and Europe: in power plants, in blast furnaces, in cement works, in industrial plants and, last but not least, in the approximately 1.4 billion combustion engines that are used to move people and goods around the world. All these fires would have to be reduced to less than half in this decade, and in twenty, at the latest in thirty years, none of them should be burning any longer if climate change is to remain controllable. Whether and how this is possible is not only a scientific and technical question, but also a philosophical one. For fire is not just any tool, it is rather the universal technology par excellence with which people not only create their artificial environments, but also operate them: People make fire, and fire also makes people. What role does fire play in nature? What has made fire so attractive to humans that they remain loyal to it to this day? And how could the Big Burn that characterizes our age be reduced to save at least part of nature from the destruction wrought by fire-using humans?

Jens Soentgen, born in Bensberg in 1967, is a chemist and philosopher. Since 2002, he has been scientific director of the Environmental Science Center at the University of Augsburg and also adjunct professor of philosophy at the Memorial University of Newfoundland in St. John's, Canada. His scientific and popular works are available in many languages and have received several awards.