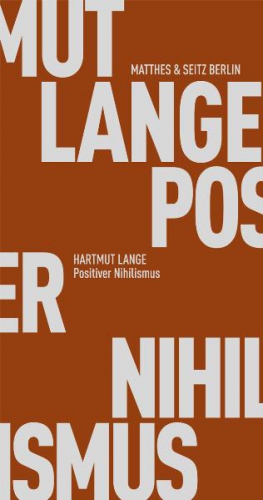 My Struggle with Heidegger

Genre: Essay, Nonfiction, Philosophy
About Being and Time

There is a beyond of reason and unreason. It is the human psyche.—Positive Nihilism

Like many German intellectuals, Hartmut Lange has long grappled with Heidegger. Positive Nihilism is the result of a lifetime of reading Being and Time and offers a series of reflections that are aphoristic, poetic, and (appropriately, considering his object of study) difficult. Lange begins with an abyss (“There is an abyss of the finite. It is temporality”) and proceeds almost immediately to extremity: “The twentieth century was governed by psychopaths. They collapsed the boundaries of moral reason and refuted Kant's analysis of consciousness.” He reflects further: “But who shall punish whom? One man's virtue is another man's crime. Thus Hitler could feel unwaveringly, as he wiped out entire populations, the starry sky above him and the moral law within him, as stipulated by Kant.” He considers the concept of civilization (“misleading”; “how should one oppose the remedies of civilization to the egomania, the murderous appetites of such outright psychopaths as Stalin or Pol Pot?”), the act of thinking (a fata morgana), the psyche, and Heidegger's Dasein.

Positive Nihilism can be considered a pocket companion to Being and Time. “Heidegger's understanding of Being is nihilistic,” Lange writes, and then explains his assertion. He draws on Kant, Nietzsche, Kierkegaard, and Shakespeare's Othello for supporting arguments and illustrations. “Everyone is possessed of the courage to have angst about death. The question is whether this courage necessarily secures those vital advantages Heidegger alleges”–that “self-understanding [is] the mental anticipation of death.” Lange wrestles with Heidegger's position, calling on Tolstoy, Georg Trakl, Herman Bang, and Heinrich von Kleist to argue against it.

Hartmut Lange was born in 1937 in Berlin. He worked for several Berlin theatres and received numerous prizes for his plays, essays and his prose (e.g., the Italo-Svevo-Prize 2003 and the Prize of the LiteraTour Nord 2004).