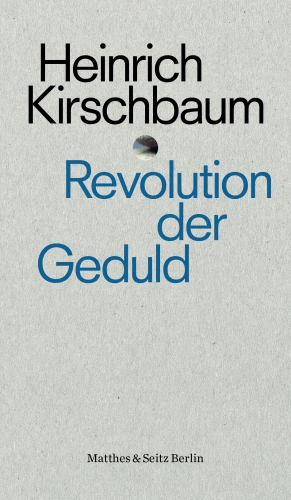 Revolution of Patience. A Belarusian Bricolage

Genre: Essay, Sociology, Politics, Nonfiction
Persistently and patiently, the Belarusian revolution is pushing forward something irreversible: a self-assembly, an anarchic subjectivation from below

In the summer of 2020, people in Belarus took to the streets to fight for democracy and freedom. The talk was quickly of a revolution, but if a revolution consists of nothing being the same afterwards, then the revolution in Belarus has not yet taken place. Or it has, but then in a completely different way: as a permanent revolution, a revolution of patience. With philological flair and cultural-historical insight, Heinrich Kirschbaum does not read the Belarusian protests as a singular event, but discovers in them the persistence of the human will for change and self-organisation: the silent, persistent marches through the backyards, the people's willingness to help each other or the diaspora that is forming in European cities bear witness to this. In twenty-two reflections dealing with language and history, poetry and, not least, one's own consternation, this "Belarusian bricolage" traces the emergence of a civil society beyond sanctioned power structures.