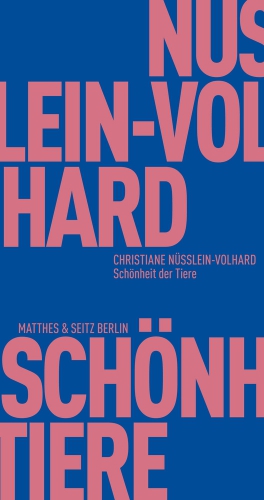 Animal Beauty. On the Evolution of Biological Aesthetics

Genre: Biology, Nature, Nonfiction, Essay
An illustrated exploration of colors and patterns in the animal kingdom, what they communicate, and how they function in the social life of animals.

Are animals able to appreciate what humans refer to as “beauty”? The term scarcely ever appears nowadays in a scientific description of living things, but we humans may nonetheless find the colors, patterns, and songs of animals to be beautiful in apparently the same way that we see beauty in works of art. In Animal Beauty, Nobel Prize–winning biologist Christiane Nüsslein-Volhard describes how the colors and patterns displayed by animals arise, what they communicate, and how they function in the social life of animals. Watercolor drawings illustrate these amazing instances of animal beauty.

Darwin addressed the topic of ornament in his 1871 book The Descent of Man and Selection in Relation to Sex, and did not hesitate to engage with criteria of beauty, convinced that animals experienced color and ornament as attractive and agreeable in the same way that we do, and that the role this played in mate choice pointed to a “sexual selection” distinct from natural selection. Nüsslein-Volhard examines key examples of ornament and sexual selection in the animal kingdom and lays the groundwork for biological aesthetics. Noting that color patterns have not been a research priority—perhaps because they appeared to be nonessential luxuries rather than functional necessities—Nüsslein-Volhard looks at recent scientific developments on the topic. In part because of Nüsslein-Volhard's own research on the zebrafish, it is now possible to decipher the molecular genetic mechanisms that lead to production of colors in animal skin and its appendages and control its pattern and distribution.

Christiane Nüsslein-Volhard is a German developmental biologist. She received the Albert Lasker Award for Basic Medical Research in 1991 and the Nobel Prize in Physiology or Medicine in 1995, with Eric Wieschaus and Edward B. Lewis, for research on the genetic control of embryonic development. Since 1985 she has been Director of the Max Planck Institute for Developmental Biology in Tübingen, where she also leads the Genetics Department.