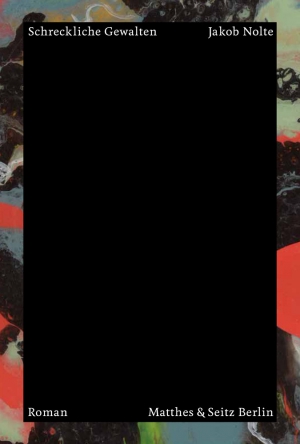 One dark night Hilma Honik turns into a werewolf and kills her husband. From now on her two children are on their own, always scared that their mothers bestiality runs in their blood as well. While Iselin decides to stay in her hometown Bergen and to build the terror group »Girls in the System«, Evard travels the outskirts of the Soviet Union and Afghanistan. A fantastic quest for meaning evolves and leads straight through 20th century and the intricacies of humanity. In his second novel Jakob Nolte paint black rainbows of horror in the sky and proves to be both a nihilistic stickler for details and a master of absurdity.

Jakob Nolte was born in Barsinghausen, Saxony. He is the author of various comics, prose pieces, and theater plays, the most recent of which was performed in Salzburg, Bonn, and Vienna’s renowned Max Reinhardt Seminar.

"Fortunately, Schreckliche Gewalten is not an economically narrated novel. Nolte's story [...] is quite the opposite: seminaristic, smart-alecky, flirtatious, pretentious, bloodthirsty, morbid, cruel, strangely romantic, and a good deal more, which is considered a tangible imposition in some literary houses. Above all, however, the novel is deadly funny. It's a novel that continually produces excess: of detail, of ingenuity, of humor, of high-class trash, of idiosyncratic sentences, of viciousness." - David Hugendick, Zeit Online

"The tone of Nolte's prose is one of ironic high jinks throughout, pairing wit and world knowledge, equally reminiscent of the enigmatic of a David Lynch and the playfully brutal of a Quentin Tarantino - and looking for its equal in the recent German-language straight." - Gerrit Bartels, MDR Kultur

"If you let yourself be put off by Nolte's penchant for spectacle, not to mention the many digressions and interpolations [...] you deprive yourself of literary fun that, in its best moments, recalls Thomas Pynchon or David Foster Wallace. Whether it's a vain pose or a clever refusal of all narrative conventions, Jakob Nolte's novel 'Schreckliche Gewalten' is an imposition in the best sense, as ingenious as it is loopy. Here, someone dares to do something." - Anja Kümmel, Der Tagesspiegel

"Jakob Nolte's unconventional style is among the most exciting that German literature currently has to offer." - Thomas Hummitzsch, Rolling Stone

"They are back: the uncreatures of black romanticism, the revenants and fantasy creatures of our nightmares. In Jakob Nolte's novel 'Schreckliche Gewalten' they meet us as hauntings. [ ...] The result is a composition as rich in thought as it is playful, which is currently unique in the German-language literary landscape." - Björn Hayer, junge Welt

"Nolte's literature is always happiness and imposition at the same time. It is playfully light, but also dizzyingly complicated, seductively bright and abysmally dark. This puts him close to free radicals like Georges Bataille or William S. Burroughs." - Thomas Hummitzsch, Tip Berlin

"An almost consistently highly entertaining madness." - Mario Osterland, fixpoetry "The novel's wit lies [...] above all in its narrative centrifugal forces, which throw it off in countless directions, like an overexcited chain merry-go-round." - Martin Lechner, Die Zeit

"It's all cleverly done by Nolte - and crazy funny to boot - but in the end it also makes for a not bad story at all, one you'll enjoy reading to the end.'Why was it possible,' one of the many supporting characters says at one point, 'not to destroy anything without creating something in the process?' That sounds like a key to the text, but in the end it's just one of countless feints in a novel that wants one thing above all: to have fun." - Michael Watzka, taz

"Nolte's novel is loopy, but beautifully subversive:[...] It pairs wit and world knowledge and is reminiscent of the enigmatic of a David Lynch as well as the playful brutality of a Quentin Tarantino." - Gerrit Bartles, rbb

"[...] Schreckliche Gewalten is itself a monstrosity; an inconspicuously uncontrollable, yet, as it turns out, precisely orchestrated web of texts that calculatedly leaves out no digressions and no dead ends." - Christoph Schröder, Süddeutsche Zeitung

"It is these incidental moments of poetic melancholy in the face of 20th-century history that give the book its tremendous power and make the novel one of the most exciting texts by a younger author of recent years." - Paul Brodowsky, Deutschlandfunk