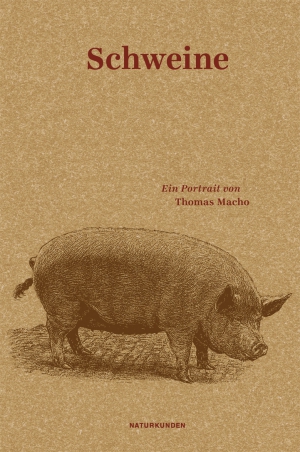 No other animal is more eaten than the pig. And the poor animal is also daily abused in the language - as an expression for unearned luck and for the lack of manners, as an insult for one‘s contemporaries and capitalists. One refers to the pig as a metaphor for omnivores and as a symbol for religious impurity, sexual lust, an unusual thriftiness and an outrageous stupidity. According to recent studies the  pig  is  also  physiologically  close  to  us  and  the  transplantation of  pighearts  in  human  chests  are  to  be  soon  awaited.  No  wonder that humans try to distance themselves from their favorite animal through  this  serie  of  tabus  and  prejudices.

The  scientist  Thomas Macho follows the destiny of pigs starting with the early domestication and going through its later role as livestock number 1. His book is a plea against the longing for clealiness, a portrait of new and old races and also the proof that pigs are every bit as complex and contradictory as human beings.

Thomas Macho was born in 1952 in Vienna (Austria). He is a professor for cultural history at the Humboldt University in Berlin and the author of numerous monographies.