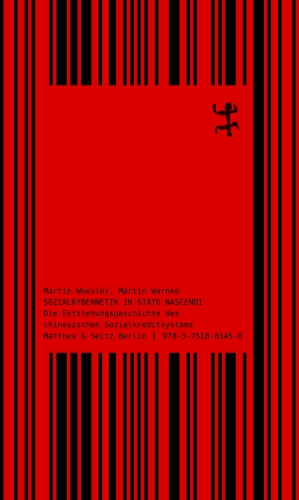 The history of the development of the Chinese social credit system

There are many critical reports about the Chinese social credit system, although the models come from the United States, Japan and Germany. What the West has brought into the world for the purpose of financial credit protection in the form of Schufa, for example, is now to be used in the East for the overall control of a nation of one and a half billion people and has already been implemented to a large extent.
The breathtaking rise of a system of protection against credit default to cybernetic mass control with the help of punishments and incentives can be traced here for the first time on the basis of extensively annotated Chinese source texts. It becomes clear that through the social credit system (state) capitalism and communism enter into a revolutionary connection, similar in structure and effect to the technical protocols that made the Internet possible. Personal trust, once the basis of all monetary transactions, must be replaced in turbo-capitalism by instantaneous, binary and computerized decisions. Anyone who wants to understand the developments will gain surprising new insights from this book.

Martin Woesler, born in Münster in 1969, is a sinologist, cultural scientist, and translator. After professorships in Germany, the USA, and Italy, he has been a staff member at Witten/Herdecke University since 2015 and Distinguished Professor at Hunan Normal University, China, since 2019. He edits a Chinese dictionary with Zhang Renli and conducts research on the social credit system and media cultures in China.