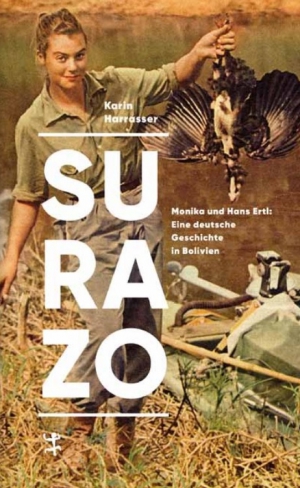 Monika and Hans Ertl: a German history in Bolivia

Genre: Politics, Biography, Nonfiction, History
A story so unique and at the same time exemplary that it reveals contemporary history as it is written: in scenes and flashbacks, montages and motifs.

On May 12, 1973, Monika Ertl is shot dead by security forces in the street in La Paz during a firefight. At the time of her death, she was in her mid-thirties and a member of the Bolivian guerrillas ELN. Her father, Hans Ertl, learns of his daughter's death on his cattle farm La Dolorida in the Bolivian rainforest. The cameraman of Leni Riefenstahl and Rommel's preferred front photographer had emigrated there in the 1950s. In his environment: right-wing nationalist dictators and SS-Obersturmführer, German missionaries and Jewish emigrants, indigenous people and apparent magicians who manage to remain invisible in full view. Following in their footsteps, this research traces the lines of transatlantic extensions of Nazi careers, traces the involvement of the next generation in the international networks of the Sixty-Eighters, and branches out to the Tyrolean Alps and Linz. Surazo, the name of the cold tropical wind, should be the title of Hans Ertl's last film; Surazo, instead, is a deep drilling that tells, as if in passing, of historiography in an entangled world; Surazo, that is the search for answers to questions that we still have to ask ourselves.

Karin Harrasser is a cultural scientist who researches the body, technology and science fiction. In recent years, her research has shifted to questions of (cultural) violence as an element of transatlantic relations, which she investigates in Colombia and Bolivia. She has translated Donna Haraway into German and has been involved in various artistic and curatorial projects. She lives in Linz, where she holds a professorship at the Kunstuniversität innen; Harrasser is also co-director of the International Research Center for Cultural Studies (ifk) in Vienna.