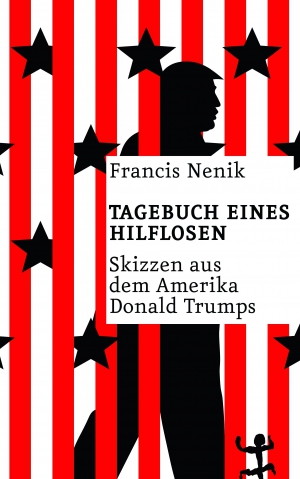 Diary of a helpless man. Sketches from Donald Trump‘s America

On January 20, 2017, the day of Donald Trump‘s Inauguration, Francis Nenik embarks on a unique writing project. He wants to accompany this bizarre Presidency in his diary. Exactly four years later it will be 1461 entries: one for each day of this term in office. Nenik is not just about Donald Trump, however. He takes a look at the entire administration to analyze the political changes in the United States and the and to accurately describe the country‘s gradual transformation. describe. Again and again, therefore, he devotes himself to seemingly offbeat topics, addresses little-known historical events and, for all his criticism of Trump criticism of Trump, he does not shy away from examining the political culture on the other side of the spectrum. on the other side of the spectrum. Through the daily diary entries, a poetology emerges at the same time, that tells the story not from its end, but as it happens. is happening. In doing so, Nenik uses the possibilities of the writer, working aphorisms and alliteration and writes literary essays on political decisions. political decisions. At the same time, he also makes use of scientific and journalistic means and forms, working with official documents, studies studies and archival material. Nenik thus succeeds in drawing a kaleidoscope of an era. of an era. A book that, in retrospect, will help us to understand understand what happened before our very eyes.

Francis Nenik, born in 1981, grew up in a small village in Saxony and now lives alternately in Leipzig and his hometown. His debut novel XO (ed.cetera) was published in 2012, followed by other novels and narrative nonfiction.