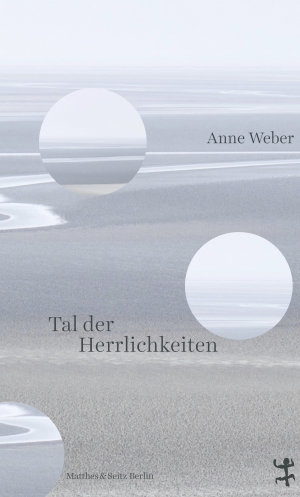 In a small port town on the North Atlantic, Sperber, a middle-aged man, lives a lonely and dreary life. While walking along the quay one morning, a stranger appears out of nowhere, kisses him on the lips without comment, and immediately disappears. This event tears Sperber out of his everyday life, awakens a longing that leaves him no choice but to immediately set out in search of this mysterious woman. Finally, he will find her in Paris. Her name is Lynx, she is missing a finger and she works at the Hôtel-Dieu. He doesn't learn much more about her, but the love that began on the shores of the Atlantic overwhelms him. In an incomparable intensity, the two lovers experience the next days together. But then the unimaginable happens and Sperber is left alone once again. Anne Weber's great book about loss and hope opens the way to a universe to which we have access only thanks to imagination and love.

The writer and translator Anne Weber was born in Offenbach in 1964 and has lived in Paris since 1983. She has translated both from German into French (Sibylle Lewitscharoff, Wilhelm Genazino, among others) and vice versa (Pierre Michon, Marguerite Duras). She writes her own books in both German and French. Her works have been awarded the Heimito von Doderer Literature Prize, the 3sat Prize, the Kranichsteiner Literature Prize, and the Johann Heinrich Voß Prize, among others. Matthes & Seitz Berlin has published her translations of the works of Georges Perros: Luftschnappen war sein Beruf and Klebebilder. Anne Weber was awarded the German Book Prize 2020 for her book Annette, ein Heldinnenepos.