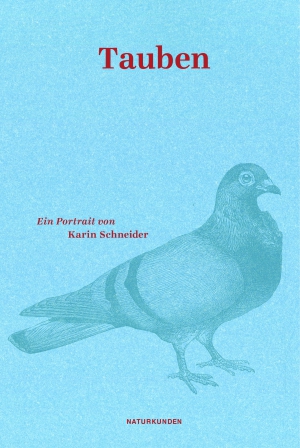 Genre: Nonfiction, Nature Writing, Nature, Essay, Picture Book
"Where there is a city, there are city pigeons. And where there are urban pigeons, there is resistance." Fahim Amir

The pigeon is not only the oldest, but also the most controversial pet of mankind: revered as a bringer of salvation and symbol of the Holy Spirit, fought against as a facade polluter, bred to be a champion in long-distance flight and poisoned as an alleged plague. It takes the homing skills of military-trained carrier pigeons not to lose one's bearings in this thicket of contradictions - or the know-how of the pair of pigeons that selflessly sorted the good lentils into the little pot and the bad ones into the little jar for Cinderella. In fact, it is probably the crop milk with which both pigeon and dove feed their offspring that allows the feral descendants of domesticated pigeons to breed in the draughty recesses of high-rise buildings and, with their astonishing mass, visibility and pecking manner, to answer the old question "Who owns the city?" cooing loudly. Karin Schneider follows the swoop of the celestial messenger of peace, whose offspring, branded as rats of the air, rummage through the rubbish of the metropolises, with astuteness and empathy for the urban outsiders.

Karin Schneider, born in Wuppertal in 1962, studied religious studies and ethnology. In addition to her freelance work as an editor, she is concerned with phenomena of urban nature and the interactions between human and non-human cultures. She lives and works in Berlin.

"This text convincingly combines great love with facts. And the illustrations make the volume a feast for the eyes."
- Ralf Stiftel, Westfälischer Anzeiger