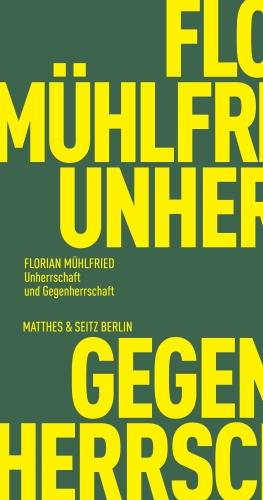 Distrust of power has become suspect in the age of Corona. Where shamans demonstrate next to Reich citizens, lateral thinking becomes a nightmare. In the process, the political potential of mistrust is quickly lost sight of. As internalised counter-rule, it contributes significantly to democratic control. And as a practice of unruliness, it counteracts the hardening of rule. While counter-rule is part of the repertoire of liberalism, unrule is a non-ideological form of anarchism. Based on case material from the Caucasus, ways of transforming distrust into political engagement are outlined. In this committed essay, Florian Mühlfried expands horizons of thought and invites us to rethink political forms beyond the current orders. It is about alternatives to the political order, without taking the order of the others as a guideline, but understanding the effective powers of alternative practices. In this way, it also counteracts the monopolisation of the "alternative" to the current political order by right-wing nationalist parties.

Florian Mühlfried, born in 1970, is Professor of Social Anthropology at Ilia State University in Georgia. His research interest has been the Caucasus region since his studies. His essay Mistrust. On the Value of an Unvalue was nominated for the 2019 Tractatus Prize of the Philosophicum Lech. Mühlfried lives and works in Tbilisi and Vienna.