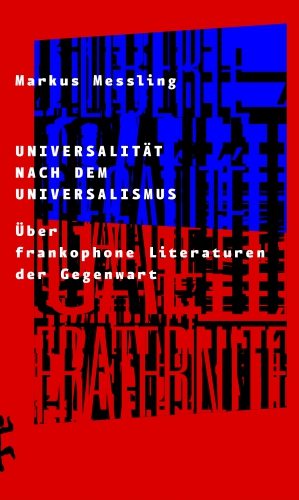 Markus Messling presents the Francophone literature of our days as a radical questioning of those ideals that once found their capital in Paris with the French Revolution and are today in a deep crisis: concepts such as universalism, equality, and world society have been strongly discredited by their history of colonial enforcement. Today, moreover, they are once again increasingly being attacked by nationalist forces. What remains of the ideals? How, after European universalism, approaches to a new universality can be found, without which knowledge and justice cannot be organized in the world society, is told by francophone literatures of the present.

Markus Messling, born in 1975, is Professor of Romance Cultural Studies at Saarland University. He was deputy director of the Centre Marc Bloch in Berlin and has held visiting professorships and fellowships in Paris, Cambridge, London, and Kobe, among other places.

"The breadth of the spectrum makes the book a valuable and very timely contribution to the debate." - Joseph Hanimann, Süddeutsche Zeitung

"Literary scholar Markus Messling is interested in the phenomenon of 'world' and its creation in literature. The novel is the place where political upheavals are increasingly negotiated. [...] In French authors, Messling discovers themes that exemplify the current 'zeitgeist' in Europe: Social dismantling, anger, loss of ideals, bottomlessness and melancholy." - Susanne Luerweg, Deutschlandfunk Kultur

"Using Francophone authors as examples, Messling shows how a new concept of world literature has emerged under postcolonial auspices. And in doing so, he introduces names that have hardly been heard of in this country: the Togolese-born Kossi Efoui, the Canadian Lebanese Wajdi Mouawad, or the Cameroonian-born narrator Léonora Miano." - Gregor Dotzauer, Der Tagesspiegel

"The number of philologists who can claim to read along the pulse of the present is not large. Markus Messling is one of them." - Florian Gödel, Hippopotamus Kings