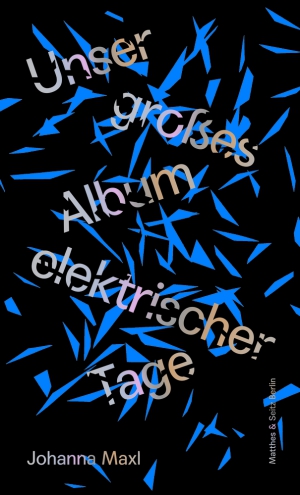 Our Big Album of Electric Days

Genre: Fiction, Literary Novel
A feminist dystopia at a time of fluid borders

Violence, pop culture, dirt, feminism and urban slums: Johanna Maxl describes the sense of life of her generation in an idiosyncratic language. Cunning mystery and tragic account at once, this debut is a literary album, which breathlessly tells the story of the search for Johanna, who vanished without reason, as we learn from her children, who appear as a collective and as single narrators. In the course of this story, consisting of memories of Johanna, questions regarding her disappearance and partly absurd pieces of the yet childish, yet juvenile life, the reader gets lost together with the children and falls into the open space. Maxl‘s literary survey of fluid identities in the 21st century is like a documentary of the present, shot with a handycam: too close, too distant, blurry and overly sharp at the same time.

Fulda Prize for the First Novel 2019

Johanna Maxl hitherto worked with her literary texts in performances and art installations. She leads the interdisciplinary platform Wort & Bild in cooperation with the artist Jakub Šimčik.

"'Our Big Album of Electric Days' is a strange text, and perhaps it's not an exaggeration to say that if, twenty or thirty years from now, you ask yourself what those decade years were like, back then, after the great euphoria of the Internet, back before - a prophecy the text makes - 'thousands of people disappeared into the slums of Europe,' you'll come back to this book, too." - Hannah Lühmann, Die Welt

"The result is a madcap tragicomedy in 14 acts that takes itself just seriously enough not to slip into the arbitrary." - Anja Kümmel, Der Tagesspiegel

"Johanna Maxl's debut novel is a reading experience that has no equivalent this year. It fascinated me from beginning to end and cast me under its enigmatic spell. Definitely a discovery and my highlight of 2018." - Stefan Diezmann, Poetry Rush