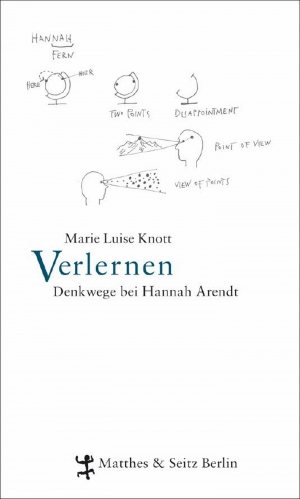 After observing the trial of Adolf Eichmann, Hannah Arendt articulated her controversial concept of the “banality of evil,” thereby posing one of the most chilling and divisive moral questions of the twentieth century: How can genocidal acts be carried out by non-psychopathic people? By revealing the full complexity of the trial with reasoning that defied prevailing attitudes, Arendt became the object of severe and often slanderous criticism, losing some of her closest friends as well as being labeled a “self-hating Jew.”  And while her theories have continued to draw innumerable opponents, Arendt’s work remains an invaluable resource for those seeking greater insight into the more problematic aspects of human nature.

Anchoring its discussion in the themes of translation, forgiveness, dramatization, and even laughter, Unlearning with Hannah Arendt explores the ways in which this iconic political theorist “unlearned” recognized trends and patterns—both philosophical and cultural—to establish a theoretical praxis all her own. Through an analysis of the social context and intellectual influences—Karl Jaspers, Walter Benjamin, and Martin Heidegger—that helped shape Arendt’s process, Knott has formed a historically engaged and incisive contribution to Arendt’s legacy.

Marie Luise Knott is a journalist, translator, and author living in Berlin. In 1995 she founded the German edition of Le Monde diplomatique and has been its editor-in-chief for the past eleven years. She has written numerous works on art and literature, as well as two important studies of Hannah Arendt.

“[A] short, powerful book.” —The Independent

“Knott has formed a historically engaged and incisive contribution to Arendt’s legacy.” —Granta

“A strangely enjoyable trip into someone’s psyche. Knott almost allows herself to channel Arendt and the book acquires a rich, inviting tone that makes it impossible not to keep on turning page after page…Knott’s clever analysis of Arendt’s work reveals a humanity that’s almost touching. The author isn’t precisely defending Arendt’s alienating viewpoints. Rather, she’s sharing with us the pleasures that can still be found in others’ thoughts—once we set aside our prejudice.” —PopMatters

“Thinking about Arendt and about the things Arendt thought about,  Marie Luise Knott has crafted a marvelous demonstration of scholarship, playfulness, understanding, and friendship across the distance the world puts between us.  Unlearning With Hannah Arendt, with its essays on laughter, language, and forgiveness, is a triumphant display of Arendt’s thoughtful humanity, and also of Knott’s. One cannot help but think that it would have delighted Hannah Arendt to imagine that she and her ideas would be discussed in this spirit forty years after her death.” —Daniel Maier-Katkin, Florida State University and author of Stranger From Abroad: Hannah Arendt, Martin Heidegger, Friendship and Forgiveness

“Describing Adolf Eichmann’s effect on Hannah Arendt, Marie Luise Knott writes, ‘He confused her, and she allowed herself to be confused.’ It was a courageous stance for Arendt to take, to allow herself in the face of the shocking, to unlearn what she thought she knew. It was a stance, Knott shows us, that Arendt adopted throughout her life. As our world continues to shock, we also must allow ourselves to be confused, to refrain from immediate resort to safe categories. We thus find needed wisdom in this sensitive meditation on the life of Hannah Arendt.” —Douglas Porpora, Drexel University, author of Post-Ethical Society: The Iraq War, Abu Ghraib, and the Moral Failure of the Secular

“Marie Luise Knott’s essays enable the reader to benefit from Arendt, even where you are actually not willing to follow her. It doesn’t show her ways of thinking as a fixation of certainties but as a process to dissolve certainties and to systematically forget them.” —Wolfgang Matz, Frankfurter Allgemeine Zeitung