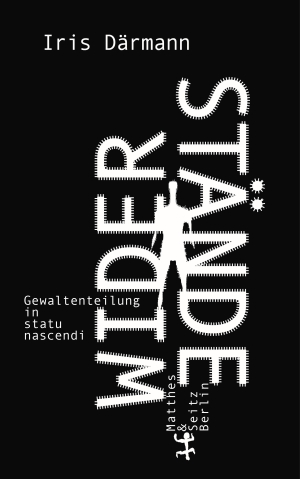 Under conditions of extreme violence, resistance seems almost inconceivable. And yet, time and again, people have wanted, sought and done the impossible. Often in the form of passive resistance, which cannot be measured in terms of success, but only by the fact that it has happened. In the of armed uprising and victorious revolution, it remains invisible. Drawing on the pioneering work of early African American Studies and Jewish Holocaust research avant la lettre, Iris Därmann‘s essay proves the pitfall of common concepts of resistance - and at the same time makes a different history and theory of resistance readable. All too often relegated by political philosophy to the space of the pre-political, it bears witness to forms of political articulation in spaces of violence. In its attention to polyphony and uncertain borderlines, resistance shows its uncertain borderlines, all its risky inventive power, which irritates and interrupts the organized course of absolute violence.

"Därmann opposes Arendt's vita activa with the recognition of a vita passiva that, in the sense of Levinas, plumbs the domain of power of the defenseless. In doing so, she calls for a broadened view into the depths of history, even to places where until now seemingly nothing could be discovered." Michael Wolf, Tagesspiegel