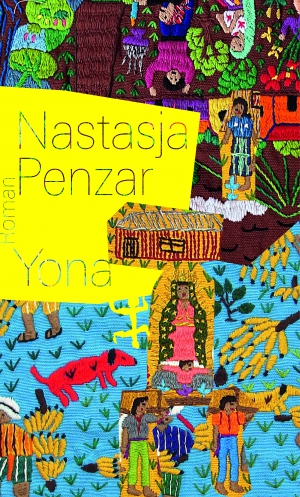 What if the last place that might still become home is steeped in corruption, racism and violence, a place where murder has become commonplace? Yona grows up alone with her father in a town in Germany that neither of them ever wanted to belong to. After the mysterious death of Yona‘s mother, her father fled the Central American country where Yona was born. But he does not want to talk about what happened then. When he too dies, shortly before Yona‘s high school graduation, he leaves her he leaves her a scrap of paper with a name: Doña A. And so Yona moves from in search of her origins, Yona moves from one foreign country to the next, to her South American birthplace at the foot of an active volcano. Here, where colonialism is visible on every street corner, although it is said never to have existed, war has inscribed itself on the faces of the people. Yona almost suffocates in the stifling sultriness and a society dominated by fear. Soon she is caught in a brutal maelstrom of gang warfare and corruption. Although she tries to keep her feelings of guilt as well as her family secrets at bay, she eventually finds out what once happened to her mother.

Nastasja Penzar, born in Berlin in 1990, lived in Zagreb, Frankfurt am Main and Guatemala before she studied Romance languages in Leipzig and São Paulo, then linguistic in Vienna and Berlin. She is currently pursuing a PhD on God and the World in Post-Yugoslavian Literature. She publishes in anthologies and journals and translates poems and plays from Spanish and Serbo-Croatian. Her theater debut _trokut_ premiered in Vienna in 2016. She lives in Berlin again.