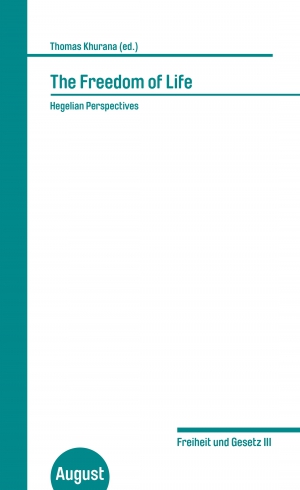 The Freedom of Life

190 Seiten, Broschur
Preis: 18,00 €
For post-Kantian philosophy, “life” is a transitory concept that relates the realm of nature to the realm of freedom. The living seems to have the double character of being both already and not yet free. The contributions in this volume take their departure from Hegel in order to investigate the extent to which we need figures and concepts of the living to understand the genesis and structure of theoretical and practical self-determination. In these analyses, Hegel’s philosophy reveals itself as a thinking not restricted to a mere opposition between the determinations of life and the freedom of spirit, but rather conceives of a freedom that realizes itself in and through life: a freedom of life.
Buch
ISBN: 978-3-94136-021-1 9783941360211
Verlag: August Verlag
Reihe: Großes Format
Sprache: Englisch
Schlagworte: Hegel, Philosophiegeschichte, Freiheit