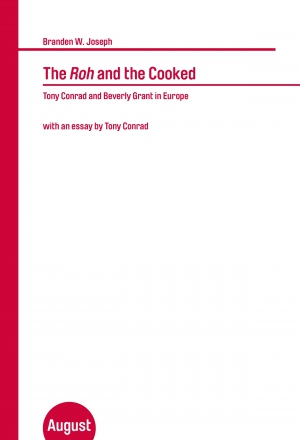 The Roh and the Cooked

112 Seiten, Broschur
Preis: 20,00 €
In 1972, New York filmmaker Tony Conrad, creator of the infamous stroboscopic film, The Flicker, toured Europe with his wife, collaborator, and Andy Warhol superstar, Beverly Grant. The path they followed would not only bring them into contact with some of the most interesting figures of European underground cinema — including Malcolm Le Grice, Wilhelm and Birgit Hein, Valie Export, Kurt Kren, Otto Muehl — but also initiate an international dialogue about the crisis of experimental cinema that would resonate on both sides of the Atlantic and radically transform Conrad’s production into the Yellow Movies and the destruction — and cooking-based paracinematic pieces such as “deep fried” films. Following the trajectory of Conrad and Grant, the book surveys the transformations in international experimental cinema and its relation to other visual arts during the 1970s. The book includes a reprint of Tony Conrad’s rare, provocative essay on Viennese Actionist cinema, “The Eye and the Asshole: Otto Muehl and the Extremes of Vienna, 196-.”
Buch
ISBN: 978-3-94136-018-1 9783941360181
Verlag: August Verlag
Reihe: Großes Format
Nachwort: Tony Conrad
Schlagworte: Conrad, Europa, Kino